‘Protests due to misinformation, Agnipath is a transformational scheme,’ says Navy Chief 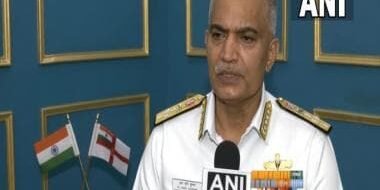 The post ‘Protests due to misinformation, Agnipath is a transformational scheme,’ says Navy Chief appeared first on Newsbundleonline.com. Reacting to the ongoing violence over the Agnipath recruitment scheme, the Indian Navy Chief Admiral R Hari Kumar on Friday said that he “did not anticipate any protests like this.”

“Protests are happening due to misinformation & misunderstanding of the scheme,” he added.

The #Agnipath scheme is a transformational scheme. It is a made in India and a made for India scheme: Indian Navy Chief Admiral R Hari Kumar pic.twitter.com/B5x3GIdaQT

Admiral Kumar said that Agnipath is the result of work lasting almost a year and a half and that the scheme is the single biggest transformation in the Indian military.

The remarks came as anti-Agnipath protests entered the third day across multiple states. At least one person has been killed as the protests spread to Telangana.

The Centre on Tuesday launched the Agnipath scheme. As part of the initiative, 46,000 Agniveers will be recruited for a four-year duration in 2022.

Up to 25 percent of the Agvineers will be retained while the rest will let go with a severance package at the end of their service.

The post ‘Protests due to misinformation, Agnipath is a transformational scheme,’ says Navy Chief appeared first on Newsbundleonline.com.