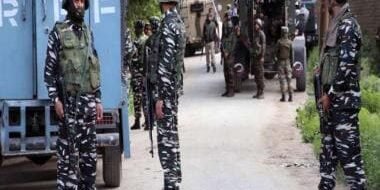 Two terrorists who killed teacher Rajni Bala, are believed to be trapped in an ongoing operation by security forces in Jammu and Kashmir’s Pulwama, IGP Kashmir said.

He added that the two local terrorists are affiliated with the Hizbul Mujahideen.

The operation resumed this morning.

Rajni Bala was shot dead outside the government school where she worked in Gopalpara in Kulgam on 31 May.

In an encounter in Kulgam that broke out earlier & resumed this morning, two local terrorists of Kulgam district, affiliated to HM, are involved. They are the same two terrorists who had attacked teacher Rajni Bala (shot dead in Kulgam). We will share more details: IGP Kashmir pic.twitter.com/pUAd1DOnvM

This operation comes as another encounter broke out between the terrorists and security forces at Kanjiular in Shopian after the personnel launched a cordon and search operation in the area.

Kumar who hailed from Rajasthan was shot dead by a terrorist on 2 June.

The terrorist had barged into Kumar’s workplace , the Elaqaie Dihati Bank Kulgam district.