In the presidential race, it’s Yashwant Sinha vs Droupadi Murmu: What the numbers reveal 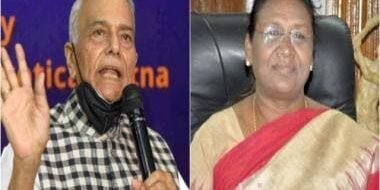 The post In the presidential race, it’s Yashwant Sinha vs Droupadi Murmu: What the numbers reveal appeared first on Newsbundleonline.com. 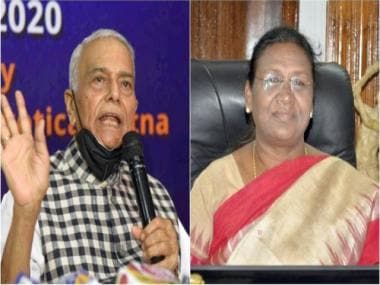 The race is decided and it’s going to be Yashwant Sinha vs Droupadi Murmu for president — the highest post in India.

On Tuesday, the Opposition announced the name of 84-year-old Sinha as their candidate for the upcoming 18 July election. The name of Sinha came up after Nationalist Congress Party (NCP) chief Sharad Pawar, National Conference leader Farooq Abdullah and former West Bengal governor Gopalkrishna Gandhi opted out of the race.

We (opposition parties) have unanimously decided that Yashwant Sinha will be the common candidate of the Opposition for the Presidential elections: Congress leader Jairam Ramesh pic.twitter.com/lhnfE7Vj8d

On the same day that Yashwant Sinha was named the Opposition’s joint candidate for the presidential election, the Bharatiya Janata Party (BJP)-led National Democratic Alliance chose former Jharkhand governor Draupadi Murmu as its candidate for the polls.

Now, with both names being announced, let’s take a closer look at the two candidates and what are their chances at the elections, which will decide the 15th president of the country.

Candidates in the race

After much deliberations, the Opposition who had until Tuesday struggled to find a candidate — as Sharad Pawar, Farooq Abdullah and Gopalkrishna Gandhi had opted out — named Trinamool Congress (TMC) and former Union minister Yashwant Sinha as their candidate for the presidential polls.

Also read: Explained: How Opposition’s efforts to find candidate for Presidential polls have been unsuccessful

The announcement came shortly after Sinha said that he will “step aside” from the party to work for the larger national cause of greater Opposition unity.

“I am grateful to Mamataji for the honour and prestige she bestowed on me in the TMC. Now a time has come when for a larger national cause I must step aside from the party to work for greater opposition unity. I am sure she approves of the step,” Sinha tweeted.

I am grateful to Mamataji for the honour and prestige she bestowed on me in the TMC. Now a time has come when for a larger national cause I must step aside from the party to work for greater opposition unity. I am sure she approves of the step.

// ]]>
The bureaucrat-turned-politician from Patna has been a staunch critic of Prime Minister Narendra Modi in recent times.

His political career, which began in 1986, took a great leap when he was appointed finance minister from November 1990 to June 1991 in the Chandra Shekhar Cabinet. He later served as finance and external affairs minister in the Atal Bihari Vajpayee government.

According to reports, Sinha is the man responsible for breaking tradition of presenting Budgets in the evening. Sinha’s 1998-99 Budget was the first to have been presented in the morning, a practice that has been followed since.

In the later years of the BJP, he found himself on the margins and in 2018 he finally stepped away from the BJP and later joined the Mamata Banerjee-led Trinamool in 2021.

As media channels and social media discussed Yashwant Sinha’s candidature for the presidential elections, the BJP-led NDA also named its candidate — former Jharkhand governor and a tribal leader of the party from Odisha Droupadi Murmu.

Shortly after announcing her as their candidate, Prime Minister Narendra Modi tweeted that Murmu “would be a great President and that she devoted her life to the marginalised”.

Smt. Droupadi Murmu Ji has devoted her life to serving society and empowering the poor, downtrodden as well as the marginalised. She has rich administrative experience and had an outstanding gubernatorial tenure. I am confident she will be a great President of our nation.

Living in one of the state’s most underdeveloped regions, her family struggled with poverty. Despite her family’s difficult situation, she went on to graduate from the Ramadevi Women’s College in Bhubaneswar.

If she wins, Murmu will become the first Odisha-born president of India. She is also the first woman and tribal leader from Odisha to be appointed governor of a state and complete her tenure.

A surprised Murmu thanked the BJP for the opportunity and will likely file her nominations on 25 June. Meanwhile, Yashwant Sinha will file his nomination papers on 27 June.

What are their chances?

The odds are stacked against Yashwant Sinha in the polls.

Based on the current numbers, the NDA has about 5.26 lakh votes in total which is roughly about 49 per cent of the total vote. This means that the NDA needs one per cent more votes to get its candidate elected for the President.

To do this, the NDA just needs one of these parties: YSR Congress or the Biju Janata Dal (BJD) or All India Anna Dravida Munnetra Kazhagam to back its candidate. In the electoral college, the Naveen Patnaik-led BJD has over 31,000 votes while the YSR Congress has 45,550 votes.

It is important to note that all of these three parties had supported NDA’s 2017 President candidate Ram Nath Kovind. Notably, the Jagan Mohan Reddy’s YSRCP has already been on board with NDA for the presidential elections making it easier for the NDA to secure its candidate’s victory.

With Murmu’s candidature, the support of the BJD is almost secured.

However, the Opposition’s decision to field Sinha as presidential candidate is a smart choice as many still view Sinha as a former BJP and former TMC leader rather than a Congress nominee.

The Congress has about 10 per cent of the total votes and the United Progressive Alliance (UPA) including the Grand Old Party has over 25 per cent of the votes. Even if we add the other opposition parties, including the Telangana Rashtra Samithi (TRS) — who has backed Yashwant Sinha — it is not expected to alter the outcome.

With the race now stacked, it is left to be seen what happens on 18 July.

The post In the presidential race, it’s Yashwant Sinha vs Droupadi Murmu: What the numbers reveal appeared first on Newsbundleonline.com.

iQOO 10 Pro rumoured to come with a 200W fast charging system, to be the fastest charging phone ever
June 21, 2022