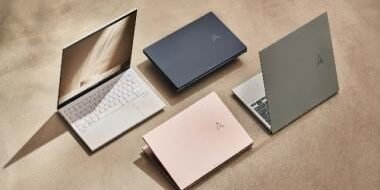 Aimed at content creators, students, working professionals or casual gamers, the recently launched lineup of Asus laptops come in various configurations and has some really strong specifications. We take a look at the specifications of the three laptops launched, and their pricing.

The laptop is powerful enough that it should be able to provide a decent multimedia experience to users as it supports Dolby Vision and Dolby Atmos. In India, the Asus Zenbook S 13 OLED starts at Rs. 99,990, and is available in two colourways, Aqua Celadon and Ponder Blue.

Asus Vivobook Pro 14 OLED (M3400) – Specifications & Pricing
The second laptop that Asus launched is the Vivobook Pro 14 OLED. The laptop comes with a 14-inch OLED display and supports up to a 90Hz refresh rate. While Asus provides multiple processor options, the best that users can get with this model is an AMD Ryzen 7 5800H which has coupled with 16GB of DDR4 RAM. As far as storage is concerned, the laptop comes with a 512GB PCle 3.0-based SSD.

These laptops will be available through leading e-commerce stores like Amazon, as well as retail outlets such as Croma, Vijay Sales, Reliance Digital and the Asus Exclusive Stores.