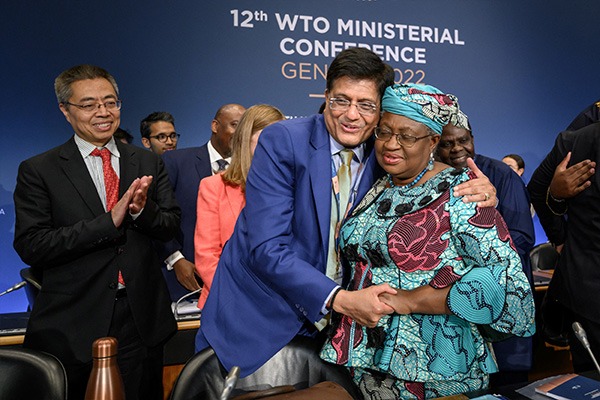 India has completely protected the interests of farmers and fishermen in the recently concluded ministerial conference of the World Trade Organisation (WTO) in Geneva, commerce and industry minister Piyush Goyal said on Sunday.

Goyal, who led the Indian delegation for the WTO talks, also said that the decisions taken in the conference will further strengthen the role of the multi-lateral body in promoting global trade and India championed the cause of the developing and under-developed countries.

Members of the Geneva-based WTO on June 17 secured a ‘Geneva Package’ which included agreements on curbing harmful fishing subsidies and temporary patent waiver for production of COVID-19 vaccines.

The four-day talks of the 164-member body, which started on June 12, ended on June 17 after hectic negotiations.

“In the WTO ministerial conference, we fully protected the interests of farmers, MSMEs, and fishermen. There will be no burden on them. We protected their interests,” the minister said here at an event where Prime Minister Narendra Modi dedicated to the nation the main tunnel and five underpasses of Pragati Maidan Integrated Transit Corridor Project.

“Checks are being placed on illegal fishing in the high seas and our fishermen will have full freedom in our EEZ (Exclusive Economic Zones). Similarly, we have ensured the MSP (Minimum Support Price) stays and our farmers interests have been protected,” he said.

Developed countries engaged in distant water fishing would not be able to provide subsidies for illegal, unreported and unregulated fishing activities, he added.

Further, the MSP operations for farmers are also protected and “farmers will not have any problem,” he said.

The WTO formulates rules for global exports and imports and adjudicates disputes between two or more than two nations. As per its rules, all decisions are taken by consensus and a single member nation can veto a decision.

He said the tunnel is part of the redevelopment plan of ITPO site at Pragati Maidan and this state-of-the-art convention and exhibition centre will be ready in time for India’s presidency of the G20 Summit in December next year .

Goyal said, the time, guidance and concern shown by PM Modi towards this project demonstrates his sensitivities towards the people of Delhi.